One or Several Tigers 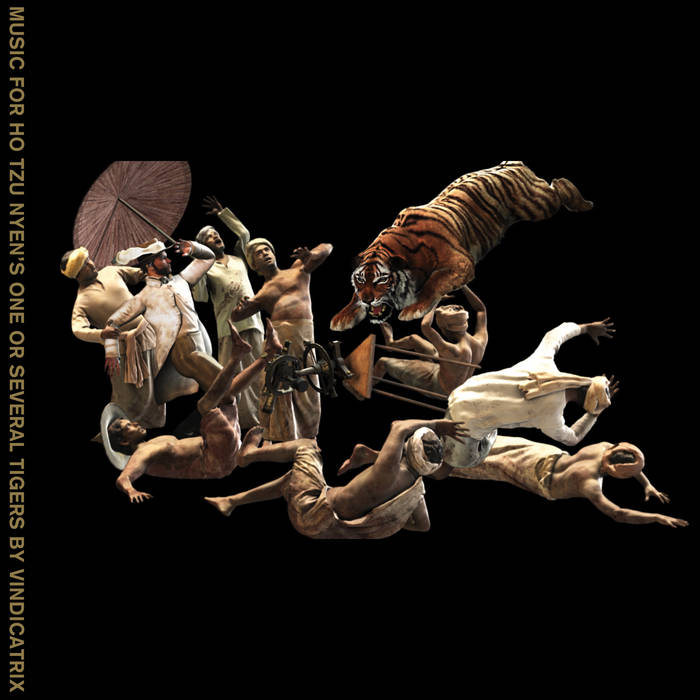 This album presents music created by Vindicatrix for Ho Tzu Nyen’s One or Several Tigers, a theatricalized installation using ancient and contemporary cinematic techniques including shadow puppetry, CGI, motion capture (taken from a suspended Vindicatrix’s body and facial movements) and animatronics, exploring the histories, cosmologies and ecologies of Southeast Asia through the figure of the Malayan tiger.

The work begins as a duet between two central figures in Road Surveying Interrupted in Singapore (c. 1865), a wood engraving by Heinrich Leutemann, depicting an encounter between a British survey mission headed by George Dromgoole Coleman and a Malayan tiger in a forest in Singapore in 1835.

In the Pre-Colonial Malayan world, the tiger was a medium for ancestral spirits. It was sometimes feared as a harbinger of disease, death and destruction, and sometimes regarded as a guardian. Shamans, vagrants, and sometimes descendants of royal blood were believed to have the gift (or the curse) of turning into tigers. This symbiotic relationship between humans and tigers was broken in the 19th Century with British colonialism, a period of ecological upheaval in which Malayan tigers were massacred. But the tiger is a master of metamorphosis, and its physical death only called forth its resurrection in new forms, with which it continued haunting the British colonialists during the Pacific War and its aftermath.

One or Several Tigers condenses this complex weave of history, ecology, anthropology and mythology into an operatic duet sung by a pair of digitally created figures. On one side, there is Coleman, Irish servant of the British empire, official surveyor and Superintendent of Public Works and Convicts in Singapore – an agent of reason, order, imperialism and capitalism. On the other side, there is the Malayan tiger – an embodiment of chaos and nature unbound, and a conduit of ancestral and magical forces.

In their fateful encounter in the forested heart of Singapore in 1835, the tiger spared the humans. After all, the survey team was mostly manned by prisoners from the Indian subcontinent who had been pressed into corvée labour on behalf of the British empire. However, the tiger made sure that it destroyed the theodolite – the most expensive instrument used for the survey mission.

Vindicatrix plays the parts of both colonial surveyor and (were)tiger, singing and speaking from various points of transformation and dialogue between animal, surveyor and narrator, within a soundworld that evokes images from the “seasonless tropical Hell” of the jungle, to the Javanese courts of Mataram – clattering polyrhythms, contorted 19th Century orientalisms, nightmarish caterwauls and fragmentary vocal treatments.

The lines between human and animal, reason and magic, and history and folklore begin to blur.