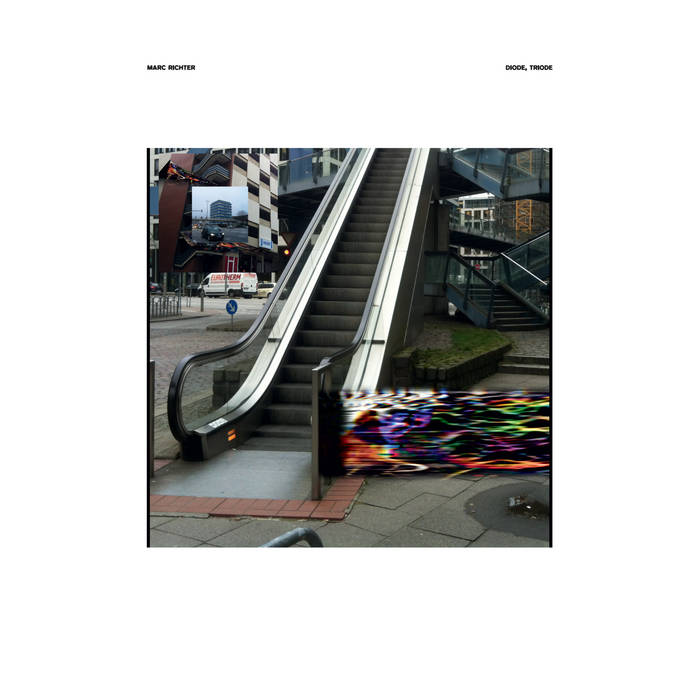 This album presents two multichannel works recorded at the seminal INA GRM Studio in Paris and ZKM Institute in Karlsruhe respectively, mixed to stereo at the composer's Cellule 75 Studio in Hamburg with excellent mastering by Rashad Becker. While his releases under the Black To Comm moniker often touched the fringes of acousmatic techniques and Musique Concrete this is Richter's first foray into a more abstract spatial music.

Recorded in the week leading up to the Paris terror attacks at the GRM studio, "Diode, Triode" (21:57) is loosely based on a reading of (and, in parts, a failure to understand) "Le Parasite" (1980) by Michel Serres, a philosophic metaphor about human interaction and communication (which can also be interpreted as a lyrical essay on capitalism; part confusion, part enlightenment).

As core elements Richter is using speech synthesis and the transformation and distortion of concrete sounds, instruments, voices and breathing. Abstract incognisable sounds are combined with strings, reeds and percussion while dismembered musical fragments emerge and vanish rapidly. Chunks of interfering noise are followed by long periods of silence; chaos and order are alternating. Choirs of synthetic and processed human voices are recounting stock market values, seemingly random sequences of numbers and inscrutable lyrics while parasitic sounds are trying to crack, collapse and fractionise the compositional stream and sonic interactions. Finally, a haunting piano chord is wrestling with a broken Publison machine. Like the book, it's part confusing, part enlightening - and a radical piece of sonic art.

"We are buried within ourselves; we send out signals, gestures, and sounds indefinitely and uselessly. No one listens to anyone else. Everyone speaks; no one hears; direct or reciprocal communication is blocked." (Le Parasite)

The second piece "Spiral Organ of Corti" (17:00) has been composed in 2014 for the 47-speaker Klangdom concert hall at ZKM Karlsruhe at the foot of the Black Forest (where Richter was born and raised).

How does one listen with closed ears? Sine tones, alienated human voices and breathing noises build a labyrinthine puzzle alternating between the natural and the artificial. Human sounds merge with winds and strings, sine tones morph into metal sounds. Acoustic illusions confuse the listener, and dense noise-clouds slowly emerge from deceptive silence. Deep base sounds define space. Temporary focus glides into chaos. "Spiral Organ of Corti" is yet another extended composition that proves Richter is on a path of his very own.

"Spiral Organ of Corti" is dedicated to the late Gary Todd.

"Tongues that came from wind and noise. To speak in tongues after the fire." (Le Parasite)

Marc Richter records as Black To Comm for Thrill Jockey, Type and Dekorder and under the Mouchoir Ètanche and Jemh Circs monikers for his own Cellule 75 imprint. He collaborated with visual artists such as Ho Tzu Nyen, Jan van Hasselt and Mike Kelley. Under his own name he is composing for film and installations.

Semiratruth joins the show to discuss their latest release, "loading..".