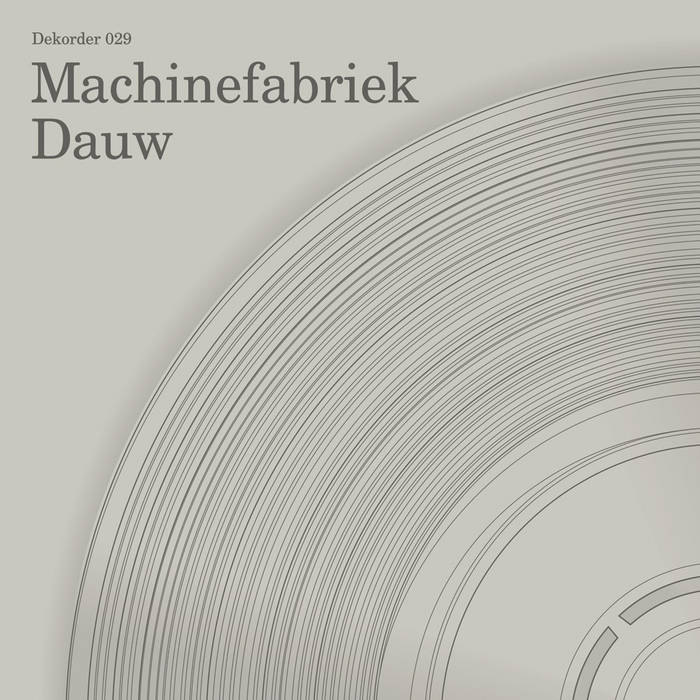 Machinefabriek is the alias for Rutger Zuydervelt currently residing in Rotterdam, The Netherlands. Since 2004 Zuydervelt has unleashed an uncountable number of self-released 3"CD's (his format of choice) in lovingly designed sleeves (all made by himself). In the past years some of these releases have been compiled into amazing albums such as "Slaapzucht" on the Root Strata label, "Weleer" on Lampse, the "Cello Recycling" 10"/CD on Type Records and "Bijeen" on Kning Disk. Recent collaborations with Stephen Vietiello (on the 12K label), Freiband, Steinbrüchel and other likeminded artists have expanded the horizon veritably. Machinefabriek's music has been remixed by the likes of Xela, Lesser, Svarte Greiner, Alva Noto, Pita, Kim Cascone, Ben Frost, Black To Comm and others.

Only few Machinefabriek material has been recorded specifically for an album release but these have always been stand-outs in the vast catalogue. Both "Marijn" on Lampse and "Ranonkel" on Burning World Records were classic recordings, squeezing a large amount of what people love about Zuydervelt's music into one album, at the same time giving him the space to expand on new ideas. Likewise "Dauw" is one of Zuydervelt's most subtle & quiet yet refined works. Mainly built around small but gorgeous melodies of piano and guitar playing and the crackling sound of dusty vinyl samples, these songs slowly build into intensive hymn-like angel choirs of sheer heavenly beauty.

Zuydervelt's output often has drawn comparisons to the likes of Fennesz, Godspeed, Arvo Pärt, Basinski, Tim Hecker, Phillip Jeck, Mogwai and Earth, which is certainly not all wrong and some of these have been influences in the early stages of his career but he has since developed a strong and individual language all of his own.

Mastered by Guiseppe Ielasi with elegant artwork by Zuydervelt himself; metallic print on grey cardboard stock.

*QUITE POSSIBLY ONE OF THE FINEST ALBUMS OF THE YEAR - AND A CAREER BEST FROM MACHINEFABRIEK* I know what you're thinking, and I admit the same thoughts were rushing through my head. It's yet another Machinefabriek album - the umpteenth this year and probably his hundredth record by now, so why on earth should we stop what we're doing and pay attention? Well, maybe because 'DAUW' is probably the best thing he's done (up there with the peerless 'Marijn'), and certainly stands as his most complete body of work blending all the elements he has been chiselling to perfection over the last few years. In the past his records have largely been anthologies of disparate ideas to some degree, explorations and collaborations some of which have been hugely successful and some less so - but what we have with 'DAUW' is a truly earth-shaking artist record, an apt realisation of the Machinefabriek sound and something which will no doubt stand the test of time. Packaged in a typically beautiful fashion 'DAUW' comes with an assertion from the label that it sounds something like Arvo Part, something like Mogwai, something like Philip Jeck and something like Fennesz and for once these comparisons are pretty much spot on. Rutger Zuydervelt has married the smart post rock sensibility of Mogwai with something far more experimental and the crunchy turntablism of Jeck with something far more accessible. The resulting sound is a deeply immersive collection of experiments, populist sounds with a noisy bent, or post rock without the rock. It's harder to explain than you'd think but when you listen to the album's truly stand-out title track (probably the best piece Zuydervelt has written) you'll understand - it manages to blend the subtle grandeur and awe of Arvo Part with the space and economy of Mogwai's early material (think 'Tracy') which is no mean feat. From a series of relatively short, arresting pieces Zuydervelt ends the journey with a half-hour ambient symphony which takes the ideas of the album's first two acts and blurs them into the final third to come up with the perfect conclusion to a haunting and dare I say breathtaking journey. A truly gorgeous record that stands out as a bright beacon amongst a mire of great Machinefabriek records - if you buy one Machinefabriek album this year make sure it's this one. Huge recommendation. (John Twells/Xela)